Guy W. Iversen AMVET Post 49 is named after and dedicated to the memory of one of Cedar Falls' own sons. Guy was one of 3 biological and 2 adopted children of Anders and Ingebord Iversen. All 5 children served in the Armed Forces in World War II.

In high school, Guy was recognized for his scholarship and athletic prowess. He was an especially talented golfer and basketball player. He graduated from Cedar Falls High School in 1937 and attended Iowa State Teacher's College for a semester. He then dropped out of school to work with his father.

The United States was in the 12th year of the Great Depression. Jobs were difficult to come by, and, as did many young men in those years, Guy joined the military. His choice was the Army Air Corps. An interest in flying prompted him to take pilot's training and upon completion, he was assigned to Clark Field in the Philippine Islands. 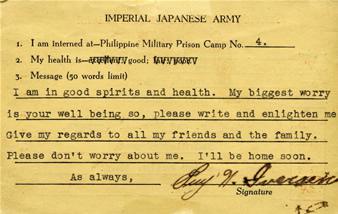 On Dec. 7, 1941, ("A day that will live in infamy") the Empire of Japan attacked Pearl Harbor. The next day the Japanese bombed the Philippine Islands, including Clark Field, and Guy suffered 1st and 2nd degree burns as a result of that bombing attack. He recovered from his burns and continued to resist the Japanese forces wherever he could.

On April 9, 1942, though fighting on Corriegidor would continue until May 6, troops on Bataan were ordered to cease fighting and the Armed Forces on Bataan were surrendered to the Japanese. Guy became one of 11,796 American and Filippinos to make the Bataan Death March to Camp O'Donnell and Cabanatuan between April 12, and April 24, 1942. 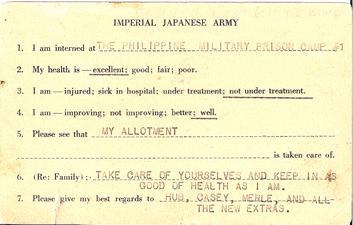 As Allied forces recaptured Pacific Islands and continued their push toward the Philippines, the Japanese began to move healthy prisoners of war to Japan on unmarked Japanese cargo ships to serve as forced labor in the mines and other war industries of Japan. It is believed these vessels were attacked and sunk, either by bombs or torpedoes, without the attackers knowing there were prisoners of war aboard. (The Shinyo Maru with 750 POWs was sunk on September 7, 1944. Only eighty-two prisoners would be rescued by Filipino guerillas. The sinking of the Arisan Maru on October 24, the first day of the battle of Leyte Gulf, followed this. This ship went down 200 miles off the coast of China. Of the 1,790 POWs, eight were found, but only five survived. Nearby Japanese destroyers saw the POWs in the water and pushed them away when they came near. Finally, the Oryoku Maru went down on December 13. The 1,619 POWs were on the ship for forty-nine days. Amazingly, 1,300 survived). Guy W. Iversen was one of those believed to have been lost at sea as a result of one of these attacks. 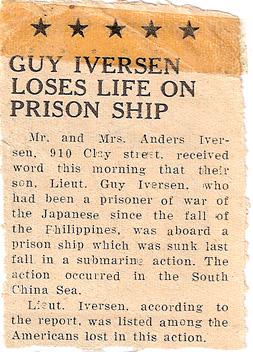 The Anders Iversen family would not know until after the war, the probable fate of their son and brother. Another family member, one of the adopted Bruce boys was killed in action in the Philippine Islands in 1944, during an action to take back the Islands from the Japanese. 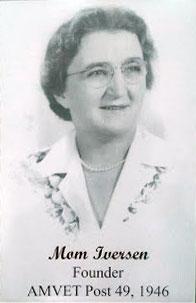 Closing time is dictated by the amount of business.

2 separate $20.00 drawings will be held Tuesday and Thursday each week with the prize increasing by $20 per week if there is not a winner.